DuPont™ Tyvek® is a unique nonwoven material that has enabled new dimensions of protection, security and safety in a wide variety of industries and applications since it was introduced in 1967. Protective apparel for industrial workers was among the first commercial applications for this one-of-a-kind invention that provides the trusted protection people need to accomplish bigger things—making the greater good possible.

Today, companies around the world use more than 200 million Tyvek® garments per year. 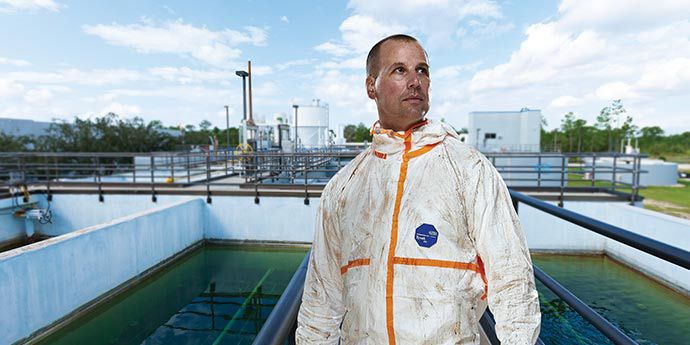 The history of Tyvek® began in 1955 when DuPont researcher Jim White made a chance discovery of a new fiber source. A program to develop the new material was set up and a year later DuPont submitted a patent proposal for strong yarn linear polyethylene. It took several more years for research teams to perfect the complex manufacturing process, which was based on the flash-spinning technology invented by DuPont scientist Herbert Blades.

In 1965, the new engineered sheet structure was registered under the trademark name Tyvek®, and in April 1967 DuPont began commercial production.

With its combination of superior barrier protection, durability and breathability, Tyvek® seemed like an ideal candidate for single-use protective garments. So in the late 1960s, DuPont developed a protective apparel pilot program at the General Motors (GM) automobile assembly plant that was located in Newport, Del.

DuPont wanted to demonstrate to GM management how Tyvek® would perform as an alternative to the reusable garments being used for “dirty jobs.” Tyvek® performed extremely well during this pilot program and GM began specifying Tyvek® garments for its assembly plants across the United States.

By the early 1970s, Tyvek® was gaining momentum, quickly becoming the preferred choice for single-use coveralls for dirty jobs such as paint spraying and fiberglass installation. Soon after, Tyvek® found a niche as lab coats for general chemistry labs.

During the 1980s, the family of Tyvek® protective apparel products continued to expand with the development of Tyvek® garments for use in cleanroom environments and the introduction of the first engineered laminates and encapsulated suits (sold under the trademark name Tychem®) for protection against chemical dangers ranging from hazardous dry powders and solids to heavy liquid chemical splash, warfare agents and chemical vapors and gases.

That was just the beginning. The innovation continues, with many new products being introduced over the years to not only meet industry needs but to anticipate them as well. Recent examples include:

Day in and day out, thousands of workers around the world in a wide variety of industries and occupations—ranging from general maintenance and other dirty work assignments to asbestos abatement, pharmaceutical manufacturing and chemical processing, to name a few—put their trust in Tyvek® protective apparel so they can focus on their jobs and go home safely at the end of their shift.

In addition to protecting workers in routine situations in their everyday jobs, Tyvek® plays a major role in protecting those who perform emergency cleanup and disaster relief efforts around the globe. Tyvek® protective apparel gives these heroes peace of mind so they have the freedom to focus on the monumental tasks they are facing without worrying about being protected. Tyvek® protective apparel has been used to protect those working for the greater good in a multitude of situations, including:

Focus on the future

A strong commitment to innovation and an unwavering focus on the future have helped DuPont set new standards in protective apparel and resulted in today’s broad offering that includes 20 different products available in a multitude of garment styles and accessories.

DuPont will be launching several new products in the Tyvek® and Tychem® product range in 2017 to meet emerging market needs. And, with an eye to the future, DuPont scientists are working on the next innovation in protective apparel.